The Day of the Dead is a cultural and religious holiday celebrated through most of Latin America, and by much of the Latin American population in the U.S., between October 31 and November 2. Defined by its observed rites and other activities to honor the spirits of the dead, it is a beautiful celebration of life and loved ones.

Día de los Muertos is celebrated across Latin America with customary food and drink, ceremonies and objects, masks and face paintings, and other cultural attributes. With so many unique traditions, and the terms and phrases that come with them, we put together a list of Spanish vocabulary that you should know if you want to truly understand the Day of the Dead.

Literally translated, it means “The Night of The Mourning.” La Noche de Duelo marks the beginning of the Day of the Dead with a candlelight procession to the cemetery.

Also referred to as All Saints’ Day in Spain, el Dia de Todos los Santos is a ritual holiday of remembrance and honor celebrated each year on the 1st of November.

Iluminación is the ceremony that takes place in the cemetery following la Noche de Duelo, where hundreds of candles are lit to guide souls to their altars for the nighttime vigil.

An ofrenda is an offering to recently deceased loved ones, and refers to the goods set out on the altars to memorialize the dead.

Angelitos translates literally to “little angels” and represents the souls of the children who have passed.

Caretas are the ornate masks worn by dancers to scare the dead away at the end of all the celebrations.

A type of Mexican folk art, papel picado is the colorful tissue paper with intricate, festive designs cut out that are used as decoration. 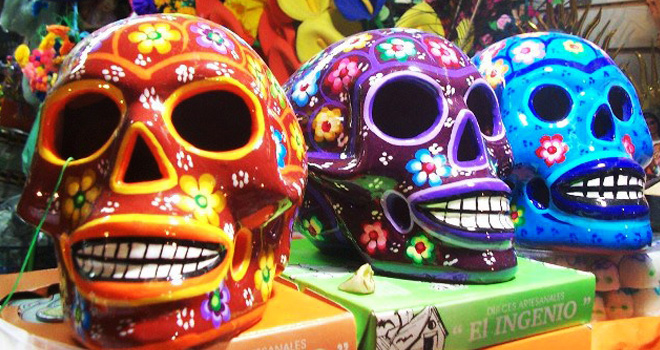 A delicate representation of the human skull, calaveras are drawings, engravings, cartoons, or models of skulls and skeletons that are made to look like living people.

A special confection made from sugar paste, alfeñique is used to create figures like skulls, fruit and calaveras for Day of the Dead celebrations.

A cempazuchitl is a marigold, the official flower of the dead. The flower’s color and scent are meant to attract souls back from the dead to the ofrenda.

Mole is a delicious, traditional thickened sauce made with ingredients like chilis, sesame seeds, herbs, spices, chocolate and fruit. Learn how to prepare mole by listening to a song dedicated in Spanglish by Lila Downs.

A circular, doughnut-shaped pastry glazed with pink sugar, golletes are placed on the altar and symbolize the sweetness of life.

A traditional drink of Day of the Dead, atole is an ancient drink made from corn meal and water, flavored with various sweet fruits.

What are your favorite words for Día de los Muertos? Let us know in the comments below.

This article was originally published on November 1, 2016, but the information is still just as good!